Home » About » Board of Trustees » Ms. Shoma Bakre 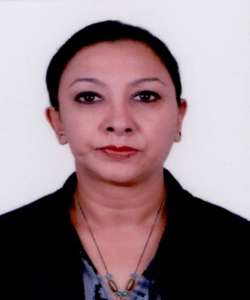 Shoma Bakre was co-founder of EmPower Research, now a part of Genpact. EmPower was started by Shoma and her partners from scratch and grown to a multi-million dollar offshore research and analytics company.Soon after the acquisition of EmPower, Shoma voluntarily retired from corporate life to pursue her passion for community service. In her personal capacity she has been actively involved for many years in helping, both at the grassroots and strategic level, various NGOs that work for the welfare of underprivileged women and children. She set up Let’s Do Some Good Foundation, a social responsibility initiative that promotes collaboration among stakeholders who would like to come together to bring about change in the areas of Education for Underprivileged Children; Vocational Training and Employability;Mainstreaming of Differently-abled Children; Health, Nutrition & Sanitation; and Women Empowerment. The foundation is successfully spearheading multiple projects such as “Bridging Gaps in Education” for ultra-poor out-of-school slum children; “Build A Toilet Project” that is building toilets in government schools to ensure girls do not drop out of school due to lack of toilets after they reach puberty; women empowerment through education, skills and livelihood training; and more. She firmly believes that faster, wider, deeper, sustainable and impactful social change can only be brought about through collaborative efforts with multiple stakeholders. Within a very short span of three years, her foundation has impacted thousands of lives simply by following the fundamental principle of leveraging collaborations.

Shoma has over 24 years of experience in diverse areas including CSR, entrepreneurship, media, human resources management, business development, corporate training and teaching. She spent several years in the U.S., working with Applied Materials and then a start-up, before returning to India where she set up EmPower’s delivery center.

Shoma was featured in the “My Mentor” series launched by Emberin Australia at NASSCOM, which shares the stories of some very successful Indian women achievers, whose stories are meant to inspire and motivate upcoming women leaders. She was the first woman entrepreneur to be featured in the Indian Startup EMERGEOUT initiative by NASSCOM. She was nominated as a Woman Achiever by CII Southern Region’s Women’s Empowerment Task Force for “making an important contribution for enhancing the status of women in the workplace and also nurturing an ecosystem that respects diversity, inclusivity, and equal opportunity for all segments of business and society.”She is on the board and advisory councils of several organizations; mentors women professionals, entrepreneurs and start-ups; andinvests in interesting start-ups and social enterprises.

She has made a short documentary film on alternate models of bridging gaps in education for the underprivileged called – Education: The Bridge to a Better Future which won an award in the 10th MY HERO International Film Festival in Los Angeles in Dec 2014.She has authored a book called
When Dreams Have Wings comprising mini biographies of seven remarkable women who have demonstrated the ability to dream, do things differently, and succeed.