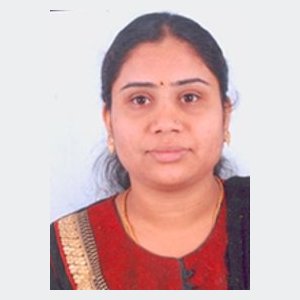 Chaitra’s father Mr. Gurunath, who is a retired police officer and mother Mrs. Prema Gurunath, who is a home maker, both hail from the town of Chitradurga. Chaitra is the youngest of the three siblings. The eldest one being Mr. Manjunath followed by Mrs. Chaya. The entire family has settled down in Bangalore for the last 40 years. The entire family has normal and healthy eyesight.

Chaitra had excellent eyesight from birth. She completed her 10th grade from Mount Carmel High School with a whooping first class score. History repeated itself when Chaitra finished her 12th grade from Krupanidhi College, in first class with a distinction, as scoring only first class was too mainstream for her. Post 12th grade, Chaitra enrolled herself into R.J.S. College of Commerce to pursue B.Com in the year 2012. Everything was running smooth until one day, Chaitra found it difficult to decipher as to what was written on the board in the accounts class. She was in her mid-20’s when the issues of her vision began to gallop along. She consulted few eye doctors who reviewed her condition by saying that it was a minor issue and would get rectified on its own. By the time Chaitra was 21 she could feel her vision getting worsened. Hence she visited Narayana Nethralaya along with her friends and not family as she feared that her family would be in jeopardy on knowing about her visionary issues. After several tests at Narayana Nethralaya, the eye specialists concluded by saying that Chaithra had “Retina Pigmentosa” which meant that the pigments in her retina were getting deteriorated gradually. The tables had turned and the truth hit Chaitra like a speeding train. She was in a state of shock.

Chaitra tried to avoid her parents as much as possible in order to hide the truth from them. She completed her B.Com despite all the hurdles with a glittering first class score. This was not the end of her chapter. Chaitra enrolled herself for M.Com in 2014 through the Karnataka State Open University (KSOU). She could not continue with a full time course due to the difficulties she faced in travelling to college, the credit owing to the deteriorating vision. Pursuing only M.Com was not appealing enough to Chaitra. She started with a screen reading training course alongside with her M.Com course. Chaitra also had a new beginning to her life when she got married in the same year in the month of May. By June 2014, Chaitra completed her M.Com, yet again with flying colors. From June 2014 to about August 2016, Chaitra took a break and dedicated her life to the household needs.

Thereafter, from September 2016, she recollected her screen reader training that she had pursued alongside her M.Com degree. After about 2 months, in November 2016 she started her teaching career as a computer instructor in Cheshire Homes which is located near Manipal Hospital in Indiranagar. It was a tedious task for her to keep an equilibrium between her professional and personal life as she had a daughter as well who was just about a year and a half at that time. In January 2017, Chaitra had visited Mitra Jyothi to deliver a presentation. The COO was quite impressed by her skills and offered her an employment post in the NGO. Chaitra did not accept the offer immediately as she had made her commitments to Cheshire Homes.

After discussing with the manager of Cheshire Homes, Chaitra found out that the manager himself was very happy about the offer that she had received from Mitra Jyothi. The manager supported Chaitra by asking her to go for the new offer as it would help her in time management as well due to the close proximity of Mitra Jyothi to Chaitra’s place. Chaitra started her career in Mitra Jyothi from March 2017 after having worked for almost 4 months with Cheshire Homes. She was appointed as the “Training and Placement Officer” at Mitra Jyothi. Chaitra was an all-rounder in her performance. Firstly, Chaitra had to train the visually impaired candidates about the usage of computers. Secondly, she was also into counselling of the visually impaired candidates. Thirdly, she was responsible for managing and arranging the volunteers for various extra-curricular activities. Last but definitely not the least, Chaitra created awareness among various corporate and non-corporate industries as to why the visually impaired people deserve a chance to be hired and treated like the other individuals.

Library: Mitra Jyothi library gave a kick start for Chaitra to work towards her ambition of entering into banking sector. Chaitra has borrowed books from Mitra Jyothi library to prepare for the banking competitive exams which helped her in cracking the exam and to bag the job of a PO in SBI. She says without those books reference it was not feasible to achieve her dream.

Hobbies: Chaitra is a fun loving person who likes to socialize and make new friends. She has a constant urge towards learning something new, each and every day of her life. She also likes to share her knowledge with people around her.

Since childhood, Chaitra always dreamt about becoming a manager in the banking sector. Due to the eyesight issues she had dropped her plans for a while and focused on completing her M.Com. Now alongside her primary goal, Chaitra has found a new goal wherein she wants to help all the visually impaired people to build their career and work independently. In order to achieve this goal, Chaitra is improving her network of contacts throughout other NGO’s and industries which would turn out to be helpful for the visually impaired candidates.

Before joining Mitra Jyothi, Chaitra claims that her life was like a blank page with no meaning and purpose. She had no clue as to what had to be done with her life.

On the contrary, since the day she has set foot in Mitra Jyothi, she says that the blank page started to fill up on its own with meaning and purpose of life. At Mitra Jyothi, Chaitra realized that eyes are not practically required to see the world. She got the opportunity to go back to fulfil her dream of getting employed in the banking sector. In mid-December 2018, Chaitra got placed as the “Probationary Officer” in the State Bank of India. She gives full credit to Mitra Jyothi on accomplishing her dream. According to Chaitra, Mitra Jyothi has proven to be the guiding light of her life as well as the other disabled people. She also says that the staff here were very friendly and compliance in nature. Finally Chaitra adds on by saying that Mitra Jyothi lives up to its title which means “A guiding light in the form of a friend”.