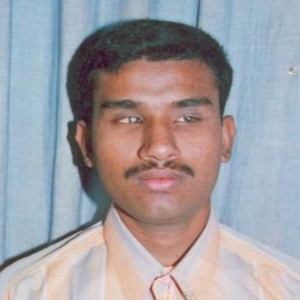 Nagaraj belongs to an agricultural family in Siraguppa taluk of Bellary district. He is the main breadwinner for his family, which comprises of his aged mother, a visually challenged brother, and two sisters who are unmarried. Nagaraj was partially blind since birth. He did his primary education (1 to 4th Std) in Vijay Merry primary school in Seragoppa. By the time he was 10 years he lost his vision completely. Unfortunately he also lost his father at about the same time. His mother never give up and she became his source of strength. His mother gave him and his other siblings a good education despite a meager income earned by stitching clothes. She enrolled him at the government school for the blind at Siddaroodhamutt in Hubli. However he was enrolled into class 1 again as he needed to learn Braille and start from the very beginning. He started to learn Braille and did his studies from class 1 to 7 in the same school. He secured 89% in class 7.

He completed his high school at the Aaroodha Education Society and in class 10 he secured 86.24% and was the first Blind student to secure highest marks in Belgaum division. He was given the Division Award for his exemplary performance. He enrolled for pre-university education at the Gopanakoppa PU College in Hubli. He completed his PUC with 80% marks in the Arts stream of History, Economics, Political Science and Sociology. Though a blind student he was the best performer securing the highest marks across the state.

P.V Nagaraj became a member of the Talking Book Library at Mitra Jyothi in 2006 during his Junior College days. Since then, he has been studying with the help of our Audio cassettes and CDs. He secured a gold medal in linguistics in his BA exam by studying with the help of Mitra Jyothi’s Talking Books. Nagaraj enrolled for his post-graduation in Kannada in Manasa Gangothri, Mysore and secured the 3rd rank in the university competing with 2000 candidates. With a resolve to write the exam on his own.

Nagaraj wished to lead a normal and independent life and had a dreamt of a career in teaching and helping other visually challenged people. He has been able to make his dreams come true with his best efforts and support from Mitra Jyothi!! He now works as an Asst. Professor in Seragoppa.

Mitra Jyothi has been the guiding light in his life that has made him the independent and confident man that he is today! All his achievements and dreams got fulfilled because of his hard work and the unfailing support he received from Mitra Jyothi. The Talking Book Library has been the key to his success.