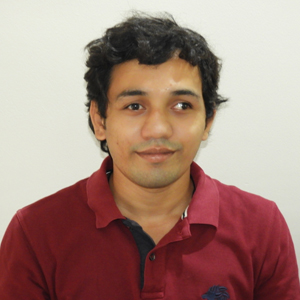 “Those who wish to sing always find a Song” is what Mr. Vinayak V Teware found in this challenging and troublesome world. He feels that you could make the difference and be an achiever if you wish to challenge yourself to live a content life. Mr Vinayak V Teware hails from Belgaum. He received the great support from his Father who is a Retired Bank Manager and from is Mother who is a Home Maker. He admires his two elder sisters and is always grateful for their love and care.

It was then he realized that he wishes to train himself with the computer literacy programme. Vinayak states that Mr Shivanaad a teacher from Maheshwari school had spoken about Mitra Jyothi and its works during his primary studies. This enthused and brought Vinayak to Mitra Jyothi. He registered for the computer training programme in the year 2010 at Mitra Jyothi. He returned to Mitra Jyothi to complete his advanced training in computes and he completed advanced training in the year 2017. This training helped him to receive the job offers from the companies around. He voluntarily facilitated the computer training to the Visually Impaired students at different schools in Karnataka.

Vinayak recalls how Mitra Jyothi Digital Library books helped to achieve the milestones in his life. He feels these books have helped him tremendously to improve his knowledge and score well during his exams. He feels happy to use the Library even now to update his knowledge through the different magazines and other general knowledge books that are published by Mitra Jyothi.

Vinayak serves the Indian Railways. He is commissioned as the Junior Clerk at the Indian Railways.
He was really inspired by Ms. Madhu Singhal and expresses his gratitude towards her for providing a platform for visually impaired to enhance their skills and reach into heights. He feels that Mitra Jyothi has been his companion over the years through all the trainings and the help that he has received to be what he is today.