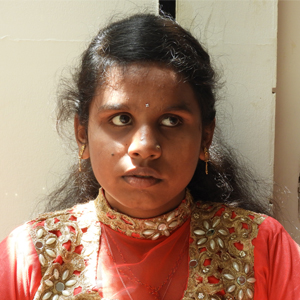 Apoorva Bahubali hails from Athani, Belagavi district of Karnataka. Her father is a farmer and has two siblings who are also visually impaired and pursuing education. Her family stands as a backbone throughout her life journey. Since she was born as blind, she has been admitted to Maheshwari blind school for her primary education. She has completed her secondary education from Matru education and SSLC from Sri Sharada Devi Andhara Vikasa Kendra Shimoga, a school for blind. She has scored 98% marks in SSLC exams which was a proud moment for her since birth. She says that this achievement was only because of the braille books from Mitra Jyothi.

Apoorva was really inspired by Ms. Madhu Singhal and consider her as a role model. She says that Mitra Jyothi braille books has played a vital role in her education as she prefers to read books rather than listening. Not only the education books have helped her but also she is a regular recipient of the braille magazine “Jnaana Samhitha”. Moreover, she was overwhelmed to speak about the quality of the printing which makes her to prefer the braille books from Mitra Jyothi. She aspires to become an IAS officer and work for the betterment of the society.

Mitra Jyothi has been issuing the braille books for different blind schools in Karnataka since many years. It has been a great help for the students in a great manner and to come up with flying colors. Since many visually impaired students prefers to read books in their primary and higher secondary education, our braille books have an important role in nurturing their education.