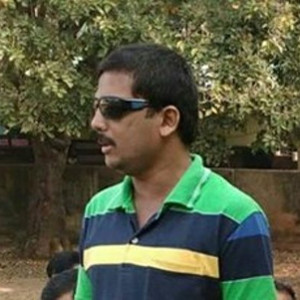 Kempahonnaiah hails from a small village in Tumkur district. His parents were agriculturalists. He lost his father at a very young age and his mother was his sole support. Unfortunately, he had deteriorating vision from a tender age. He was enrolled in a blind school in Mysore from where he completed his entire schooling. He completed his PUC from Mahatma Gandhi junior college in 2001.

Despite innumerable challenges, Kempahonnaiah’s mother was determined to help her son pursue his education. She wanted to support him and make his dreams come true. He pursued his higher education in Mysore. His educational qualification is exemplary.

In 2008, he started his career in Bheematagere, PUC College in Mysore as a Kannada Lecturer. After serving there for a period of 6 years he was transferred to Ontikopaalu PUC College in Mysore.
Kempahonnaiah is great visionary and an example to all. His was determined to take up the UPSC exams and become an IAS Officer. He did not let his initial setbacks and failures deter him from working harder and trying again. He has even cleared the Karnataka State KPSC exams. He took the UPSC exams in 2016 and successfully cleared it securing a fantastic rank of 340. With his wonderful ranking, he is the first person to be selected for the interview round from Karnataka.
He is married to Anchitha who is a big source of support in his life. She encourages him to dream big and inspires him to make his dreams come true.

Kempahonnaiah’s dream was to clear the UPSC exams and be an IAS Officer. Further information regarding is interview and posting is awaited. Recently when the UPSC exam results were announced he was featured in many TV channels and newspapers. A photo of his article in the Kannada daily Vijayavani is provided below. In this article with all modesty has thanked everyone who has been with him through his education and efforts. He says that his biggest support is his wife Anchitha, he has dedicated his success to her. He has also thanked his friends, some of his supporters and the many organizations that work for the visually impaired along with special mention of Mitra Jyothi for providing him audio books that he needed for his education and further for preparing for all the competitive exams including the UPSC. Mitra Jyothi wishes him great success in his upcoming career in the Service of our nation! We will be happy to record more books to suit his needs anytime!

Kempahonnaiah became a member of Mitra Jyohti’s Talking Book Library at the age of 17 in the year 2001. At that time he had just completed his pre university education and had enrolled for his B.A. He has effectively utilized hundreds of books from our Talking Book Library for his educational needs. Dozens of books have been recorded by Mitra Jyothi based on his requests alone. He is an avid reader and has borrowed countless number of books across various categories. Mitra Jyothi is proud to have provided him study material for the KPSC and UPSC exams.
Mitra Jyothi team is very happy and pleased to see Kempahonnaiah’s success and to have been a part of his journey. It is the success of people like Kempahonnaiah and everyone else who live independent lives with the support of our enablement programs that makes our cause so very worthwhile and the vision and mission of our founder Madhu Singhal so sacrosanct!