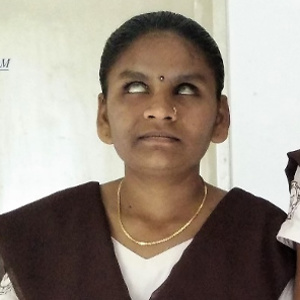 Vaishali was born in a family of six children and she is the second child. She was affected by typhoid at the age of two. Due to lack of awareness & poverty, her parents could not take proper care of her illness and that led to vision loss in her. Her parents were very afraid to send her out for studies; hence she was at home till the age of ten. She felt very lonely and isolated as she had to be at home all the time. Later they enrolled her in Smt. Ambubai Residential School for Blind Girls after being introduced to Mr. Dattu Agarwal, the founder of the school. Her journey of education finally started as she was enrolled into class 1 at the age of 11. This was the most needed change in her life. She went on to complete her schooling till class 10 in the same school. She secured 80% in her S.S.L.C (class 10) examination.

Immediately after writing her class 10 exams in March 2017, she and a group of her friends (5 of them in all) enrolled themselves for the Basic Computer Training for the visually impaired at Mitra Jyothi conducted during the summer months (April – May 2017) specifically for school children her age. Mr. Dattu Agarwal, informed his students about Mitra Jyothi and the programs offered by Mitra Jyothi for the enablement of the visually impaired. She has completed her Basic Computer Course in flying colors. Along with her Computer Education, she was also trained with “Mobility Skills”.Ms. Madhu Singhal identified her potential and decided to work with her to support her college education. Mitra Jyothi has enrolled her into Government Pre-University College in H.S.R Layout, Bangalore. This pre-university college is just about a kilometer away from Mitra Jyothi.

She has selected the arts stream and studies History, Economics, Political Science and Sociology along with Kannada and English. With the mobility skills she has honed at Mitra Jyothi, she can independently walk to college and uses a white cane to support her. She is also a member of Mitra Jyothi’s Talking Book Library from where she borrows audio books for her study and general reading needs. She gets help in the form of Braille books also. She is also a part of our “Independent Living Skill” Training Program that she attends after her college hours. She is a hard worker and Mitra Jyothi is very happy to have got the opportunity to support her. She will reside in the dormitory on Mitra Jyothi Campus during her college education.

Vaishali wishes to study social sciences and become a lecturer after her education. She also wants to work on building awareness in marginalized societies and save other children from going through the plight that she had to endure. Educating parents and bringing in awareness at grass root levels is what she wants to eventually do as a productive member of mainstream society.